Wunderbar Together: A Report on the Diverse and Thriving Cincinnati-Munich Relationship

Ute Päpke, President of the Munich Sister City Association of Greater Cincinnati, submitted a report on the strength and diversity of the Munich-Cincinnati relationship, including its numerous forms of exchange, commemorating the fall of the Berlin Wall, and the recent celebration of the partnership’s 30th anniversary. The report provides an overview of the partnership and summarizes key events from January to November 2019.

For more information on the Munich-Cincinnati partnership: 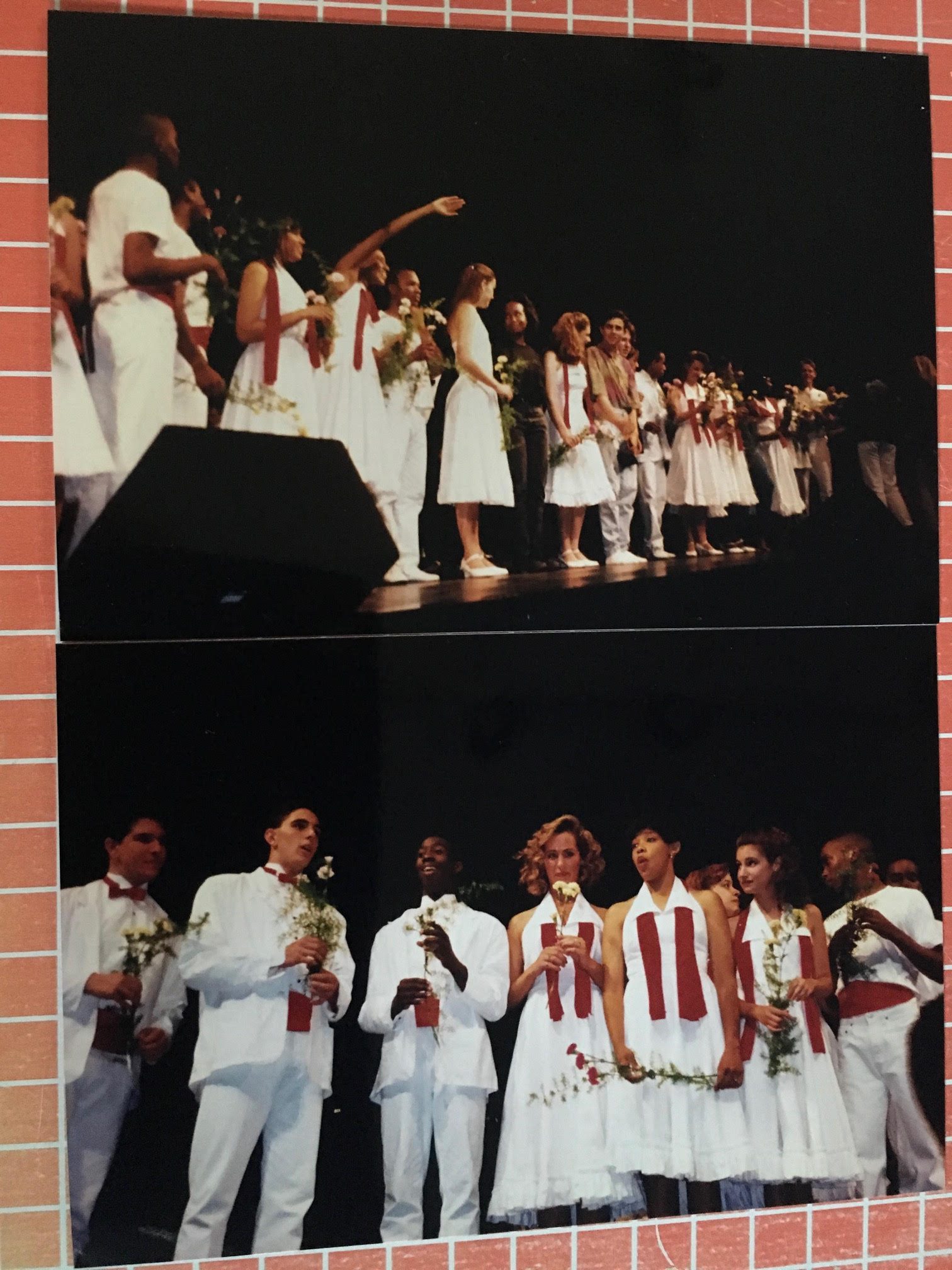 Origin of the Munich-Cincinnati Partnership

The Munich-Cincinnati partnership was officially founded in 1989. In 1989, I was one of the Founders of the Munich Sister City Association and was President from 1995-1999. I have held numerous other positions, including fundraising. The City of Cincinnati has 9 Sister Cities, but we do not receive any financial support. Meanwhile, the City of Munich has an office, staff, as well as a budget for their 7 Sister Cities and we have been told we are the most active.

Munich and Cincinnati have maintained an active intern exchange. I was asked by the U.S. State Department some years ago to come to Frankfurt, Germany for a Sister City conference for all German cities who had U.S. partners and to give a presentation on economic development. Many Sister Cities are funded by City Hall and or the Economic Development Department. At the Frankfurt conference, someone from Landshut asked if they could send an intern to Cincinnati and that was the start of the exchange.

We have had 12 interns here who stayed an average of 3 months. The City of Munich pays them while they are here, thus the employer does not pay them. All are in their 3rd year of a dual (co-op) program. Their entire college education is taken care of by the City of Munich. These young people just have to commit themselves to work for the City of Munich once they are done. Some study law, some IT, some to be administrators and all stay with host families. 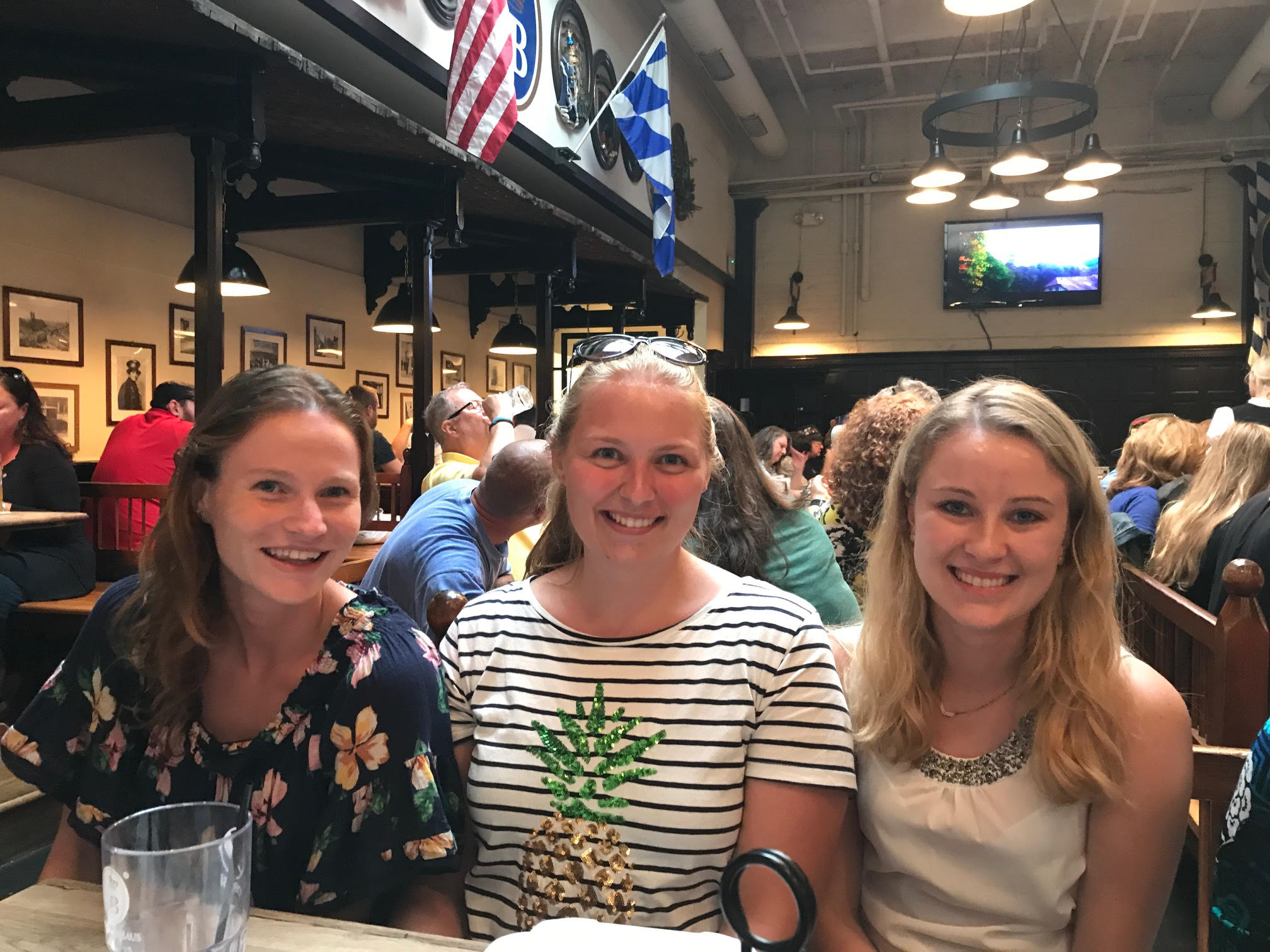 Three of the Munich interns from 2018 at the Hofbraeuhaus in Newport, Kentucky

Many friendships have developed from this. Some have worked for the Bar Association, some for the Mayor‘s Office, some for JTM, for the Court house, for the Sheriff‘s Office, for the UC Law School Innocence Project, and much more.

Munich and Cincinnati participate in student exchanges. 1995 was the first high school student exchange of 15 students for 2 weeks. The Munich Sister City also provides contacts to companies the students visit to learn what those companies do, how they do it and why they are located in Munich. We have also just begun to establish a vocational student exchange. 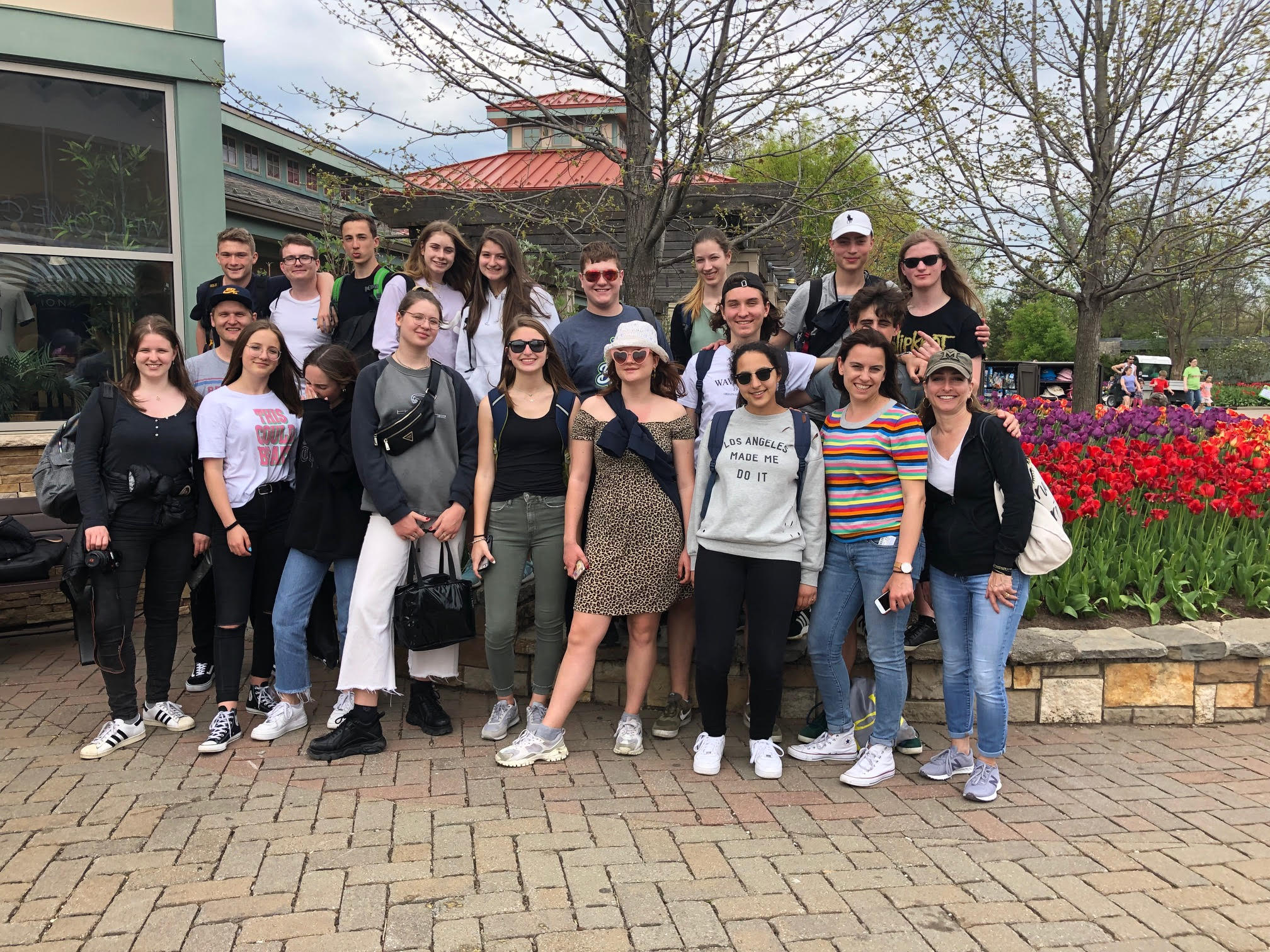 In 2014, the University of Cincinnati Medical School signed an agreement with the Ludwig Maximilian University (LMU) to allow faculty and students to come here or go there and have their work accredited after the Munich Sister City Association led by Dr. Kathy Wedig Stevie started this program and kept it going for about 10 years.

We also have a teacher exchange (which is now done by the Hamilton County Board of Education) and usually consists of 8 teachers who go to Munich in June for 2 weeks and the Munich teachers come here in April. That exchange begun in 1991.

Meeting firefighter Thomas Haas prior to his Cincinnati visit

In June, Thomas Haas (a firefighter) from Munich spent several weeks with local firefighters to learn what is done differently and what is the same. A delegation visit to Munich has also included a meeting with the President of the Fire Department.

Art collections have also come to the art museum. Most recently, at the CAC the work of Jens Janzen on the refugee crisis was exhibited. There have also been artists exchanges which were organized by Jan Brown Checco.

Finally, we also have excellent contacts with the Jewish community. 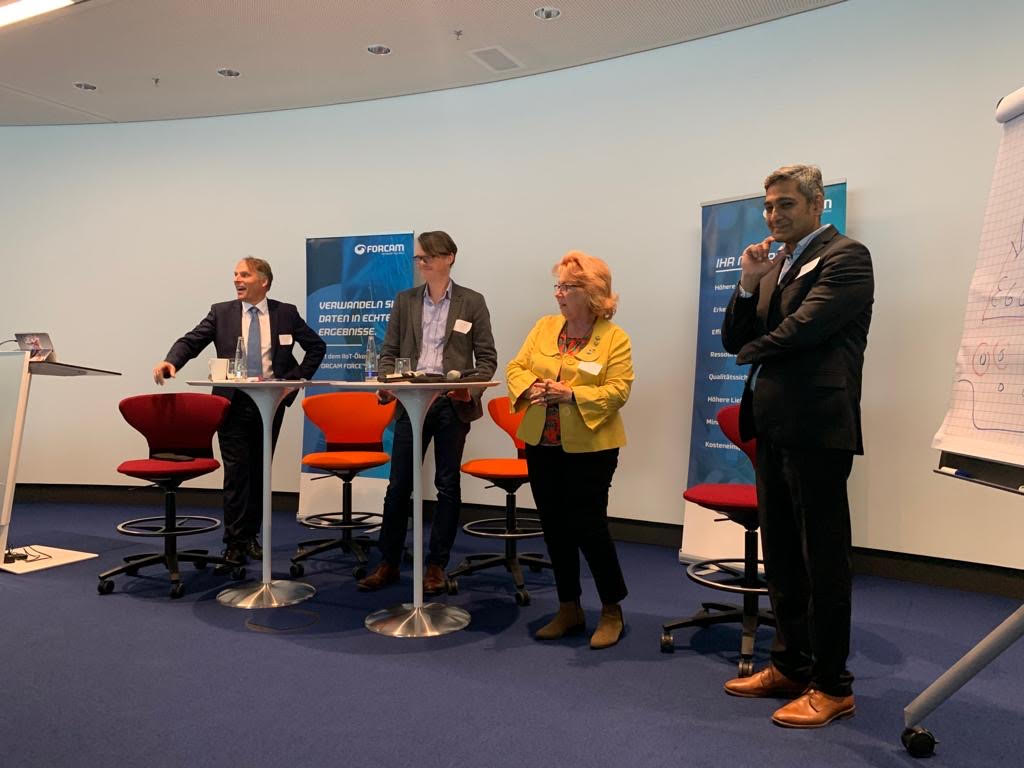 In May of this year, I led a delegation of 14 business people to Munich. This was to commemorate our 30th partnership anniversary, which is not celebrated the same as the 25th or 50th. The U.S. Consul General Meghan Gregonis gave a reception for about 70 at her residence and had asked me to create a guest list, which I did in coordination with her. Her Personal Chef would also like to come here on an exchange and we will make that happen.

Afterwards, we had a very lively panel discussion on Industry 4.0 at the Munich Re headquarters. The company hosted us. We worked with the U.S. Commerce Department, the American German Business Club, the Economic Development Office, and the City Hall in Munich. The City of Munich also gave a beautiful reception with roughly 70 attendees in the „small“ City Council room, which is quite large and beautiful with wonderful carvings and goblins. We also discovered that about 4,000 people have come to Cincinnati and gone to Munich in the past 30 years. 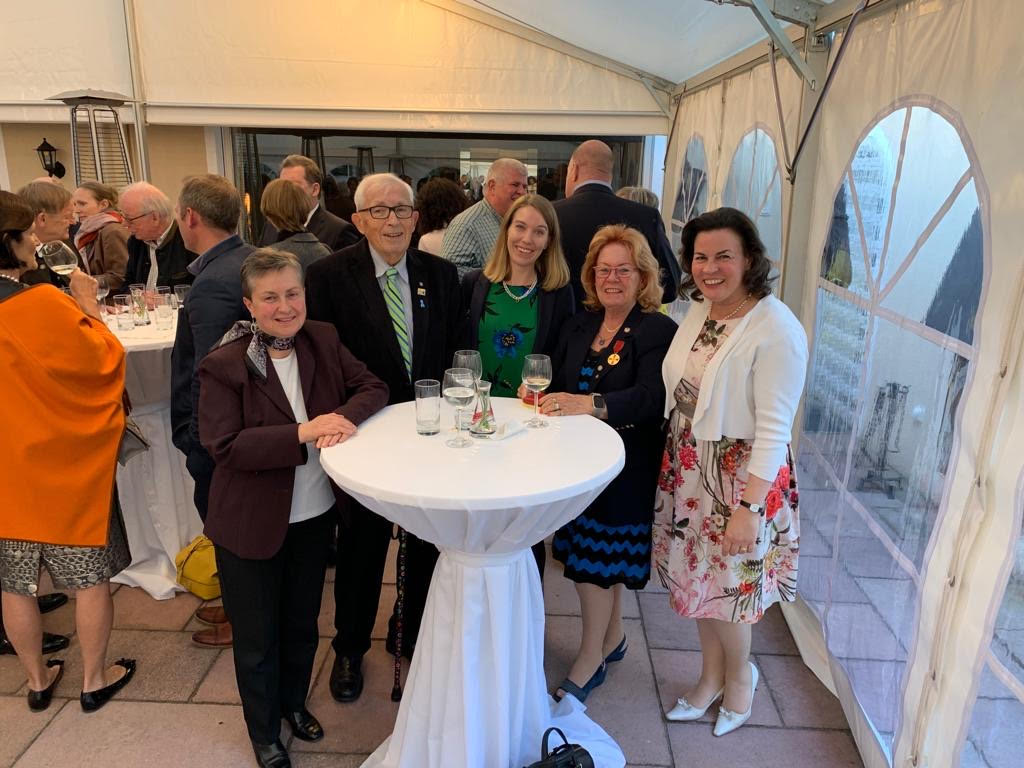 Munich reception at the residence of U.S. Consul General Meghan Gregonis in honor of the partnership’s 30th anniversary

In addition, there were meetings with the President of the Police as well as the President of the Fire Department, the Amerikahaus, the Harmonic Brass Quintet, and more. We also joined 25 University of Cincinnati Business-students and their advisors for lunch, sponsored by the City of Munich at the Donisl.

We thankfully already had access to reasonable airline tickets, and then the City of Munich even gave me 14 tickets to the FC Bayern game which is totally „Over the Top.“ Especially since they again became the German champion.

Hans (my husband) and I stayed from May 7th-24th, 2019 with 3-4 meetings every day. We keep in touch with as many people as we can to further the diverse exchanges. 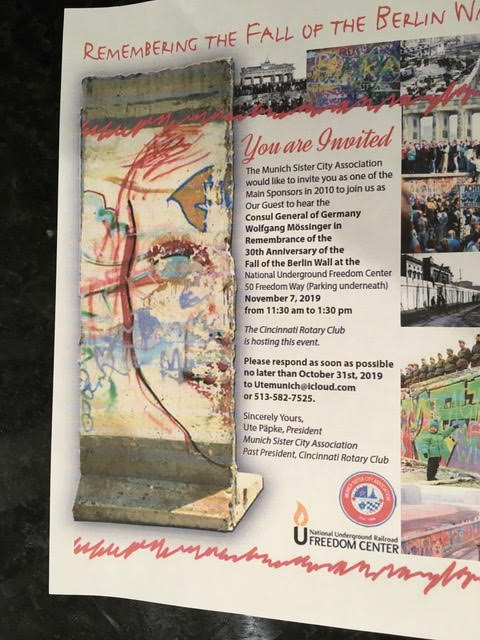 The Munich Sister City Association and the Rotary Club of Cincinnati (of which I am a Past President) collaborated to hold a special event on Thursday, November 7th, 2019 at the National Underground Freedom Center in Cincinnati in remembrance of the Fall of the Berlin Wall 30 years ago. The commemoration included a wreath-laying, lunch, and a presentation by Consul General Wolfgang Mössinger. In 2008, the  Munich Sister City Association also brought over a section of the Wall (which was 6,111 lbs in 2008 and sits in a small Park in front of the Freedom Center).

For the Oktoberfest in Cincinnati Stadtrat (City Councilman) Mario Schmidbauer was here to assist with the opening of our Oktoberfest and we took him to two FC Cincinnati games and to see the Reds and more.

Symbols of the Partnership

We have a huge sculpture in the International Park called Castle of Air East of the Montgomery Boathouse. The model for that will be seen in the new Lindner Business College Building.

The Cincinnati Parkboard also designed a Cincinnati Garden in Munich’s neighborhood of Rhiem.

A square in Giseing at the end of the Cincinnati Street has additionally been named Auguste Kent Platz.

There have been many delegations and shows – too many to mention. Just one: in 2000 we had a show of artists, potters, and much more at the Heim and Handwerk show in Munich and shipped – thanks to Delta – 19 crates which included paintings, etc. In also included five of the PIGS from the Big Pig Gig. Jan Brown Checco organized and convinced the Artists. It was awesome!!! 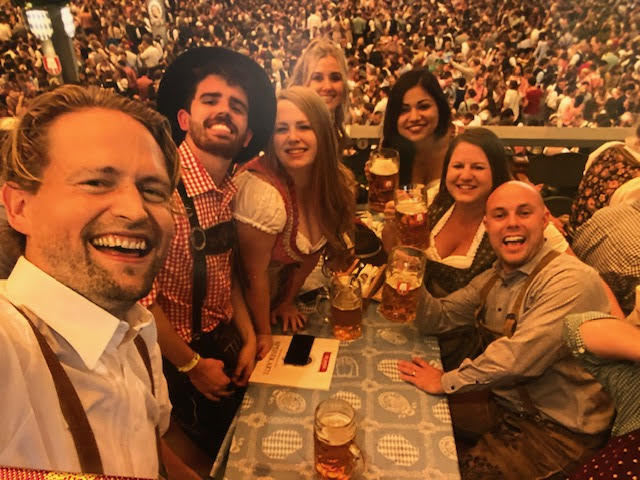 Cincinnati Youth at a table at the Rathaus in Munich

The Munich Sister City Association is also assisting Harrison, Ohio to become a Sister City with Meckesheim in Germany.

We are also now beginning to establish a vocational student exchange.

Our latest project is that we are working with Dean Thomas Beck of the Chemistry Department to contact other chemists and students to expand the Marlies And Hans Zimmer Scholar program with support from Munich.

This blog post forms part of Sister Cities’ “Wunderbar Together” series, part of our ongoing involvement in “Wunderbar Together,” funded by the German Federal Foreign Office, implemented by the Goethe-Institut, and supported by the Federation of German Industries (BDI). This year, we are showcasing stories that highlight the impact of German-American exchange on the local level, as well as the heritage, interests, and common values shared by the United States and Germany. To submit your own experience with German-American exchange or involvement in a German-American sister city partnership, please fill out our form here.